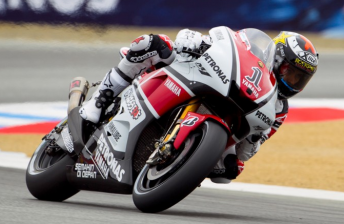 Jorge Lorenzo has finished Day 1 of the Red Bull US Grand Prix at Laguna Seca on top of the timesheets, ahead of the Repsol Hondas of Dani Pedrosa and Casey Stoner.

Last year’s Laguna Seca race winner Lorenzo put in an remarkable run in the second free practice, leading the times with consistent laps from the early part of the session until ending on the top of the field with a time of 1m22.056s, just 0.1s quicker than the 2009 race winner Pedrosa.

Third was Stoner, who was fastest in the first practice session, only to have a small incident at Turn 3 in the second session. The Australian championship leader was 0.175s off the reigning Lorenzo’s leading time.

The third Honda of Andrea Dovizioso was the fourth fastest, with a time of 1m22.537s, moving him up one spot from his earlier fifth position.

The top American in both sessions was Ben Spies, displaying a special anniversary livery on his Yamaha Factory. Spies set a 1m22.615s to put him in fifth place on his home turf.

Bigger time improvements were seen from position six onwards, starting with Marco Simoncelli (San Carlo Honda Gresini) whose time of 1m22.803s was almost a half second improvement for the crowd favorite, and was 0.253s quicker than seventh place lap of Álvaro Bautista (Rizla Suzuki), who also improved by 0.5s from the earlier session.

Valentino Rossi, who has crew chief Jeremy Burgess back in the garages after a two race absence, followed his Ducati team-mate in 11th.

Next Story Lorenzo on pole despite major crash