Leading V8 Utes drivers Grant Johnson and David Sieders will get an opportunity to test a V8 Supercar next month.

Johnson and Sieders will conduct two days of theory and driving with Paul Morris Motorsport as part of their reward for winning the V8 Ute Series and rookie of the year prize last year.

The test will be held at Queensland Raceway on August 4.

Sieders has experience with Ford Performance Racing as its junior development driver and competed in various rounds of the Fujitsu V8 Series from 2008 and 2009. He raced in the V8 endurance races in 2009. 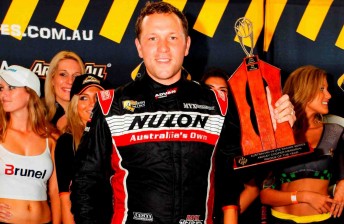 Sieders says he is looking forward to getting back behind the wheel of a V8 Supercar.

“I’m super excited and can’t wait to get back in to one,” said Sieders.

“As a driver you never stop learning, whether it is from Craig Lowndes or a Go Kart driver, I think the experience with Paul Morris Motorsport will be well worth it.”

Johnson and Sieders are both running in the top four in this year’s V8 Ute Series. Johnson is in second position, only four points behind Chris Pither. Sieders in fourth, eight points behind Ryal Harris.

The next round of the V8 Utes Series will be held at Mount Panorama on October 6-9.

Previous Story Kelly: Our reality TV show is good for the sport