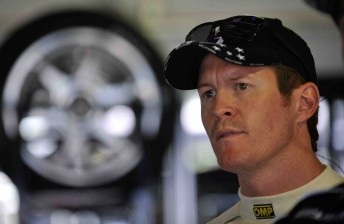 Scott Dixon has been confirmed as Shane van Gisbergen’s team-mate for the Armor All Gold Coast 600 – but there could be a hitch to the team’s plans.

The former Indianapolis 500 winner will partner van Gisberegn in his #9 SP Tools Falcon FG at the Sufers Paradise track, unless there is a clash with another event in Dixon’s life – the birth of his second child.

Dixon’s wife Emma is due to have the pair’s second baby that week, but he says that team owners Ross and Jim Stone have prepared a “back up plan” in case there are issues.

“My wife Emma is due to have our second baby that week and it took a while for me to make up my mind to come, but she was insistent that I come back and race with Ross and Jimmy,” Dixon said. 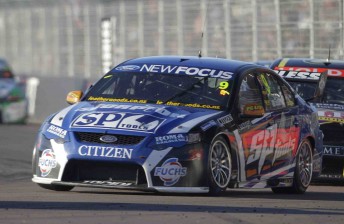 The #9 SP Tools Falcon at Townsville

Assuming Dixon’s personal life does not clash with his race commitment, he is looking forward to teaming up with van Gisbergen, creating a very strong all-Kiwi line-up.

“Surfers Paradise has always been a special place for me and anyone else that has raced there,” said Dixon.

“It is almost like a home race for me having been born in Brisbane and raised in New Zealand.

“It is going to be like the Kiwi Super team with me driving with Shane in a car prepared by the Stone Brothers.

“Ross and Jimmy are obviously racing heroes in NZ and it is going to be pretty cool to drive for them.

“I enjoyed my first outing in a V8 Supercar with the Kelly boys last year and being part of an all-Kiwi assault will add even a bit more spice.”

The other SBR entry of Alex Davison (IRWIN Tools) will see German Marc Lieb partner him.

Queensland Minister for Sport, Phil Reeves, said that the return of Dixon was a tremendous coup for the event.

“To have Stone Brothers Racing pull together a Kiwi Super Team with the signing of Scott Dixon is great news and I am sure will bring even more attention to the event across in New Zealand,” said Reeves.

“The Bligh Government is a big believer in this event and what it brings to our fantastic State. The returns will be taken to an event greater level this year.”

Next Story Kelly: Our reality TV show is good for the sport