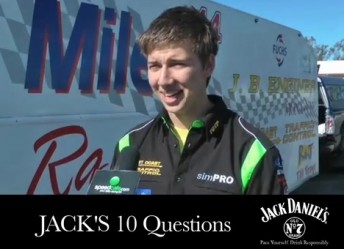 Chaz Mostert is one of Australia’s V8 rising stars.

The former Australian karting and Formula Ford champion has moved into the Fujitsu V8 Supercars Series this year, currently running eighth after three rounds in the competitive development league.

In this edition of Speedcafe.com’s Jack’s 10 Questions, Mostert speaks about racing V8s, his favourite food, his best racing results and whether he likes blondes or brunettes …

Mostert competes in the Fujitsu V8 Series for Miles Racing’s two-car Ford team. He is personally sponsored by Monster Energy.

Jack’s 10 Questions is brought to you by Speedcafe.com’s founding platinum partner Jack Daniel’s.