Over the past weeks, Triple Eight’s Dane and Paul Morris Motorsport boss Paul Morris have been investigating how they could merge their outfits to create a four-car ‘super team’, but the pair has amicably decided not to continue with its plans for 2012.

Triple Eight’s two TeamVodafone entries of Jamie Whincup and Craig Lowndes currently sit first and second in the V8 Supercars Championship, and the addition of two more cars into the champion team’s stable has been the talking point the V8 Supercars community over the past two weeks.

Dane confirmed that the plans to form a joint venture were now on hold, but says that T8 and PMM will continue with its technical alliance next year. 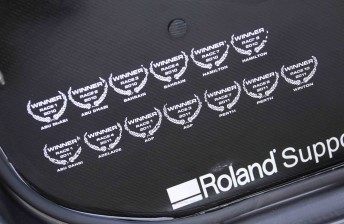 Most teams in V8 Supercars would be happy to have this many wins in their entire career. This collection is the wins that Jamie Whincup has achieved in his current Commodore VE chassis ...

“We’ve made that decision, so now it’s just a question of how we best help Paul achieve his objectives.”

Dane insists that there were no outside pressures on the decision, but admits he was conscious of his team’s current sponsor arrangements, the make up of his team and the V8 Supercars category as a whole.

“We could go to four cars anytime we want, it’s just always a question of balancing everything,” Dane said.

“We want the best make-up for us, for our sponsors, for the category as a whole and we made the decision that we didn’t want to do it at the moment.

“I’m not disappointed by it. If I was disappointed, I’d do it. I made the decision taking everything into account – for what I think is best for the championship and the team’s participation in it.”

While Triple Eight won’t expand to four cars, it will continue to enter its twoVodafone-backed cars, plus one or two entries in the Fujitsu V8 Series, providing category rules allow Championship teams to remain in the development series.

“As long as the rules allow, then there’s a good chance that we’ll be in the Fujitsu Series. If the rules ban us, then we won’t,” said Dane.

“I’m enjoying having a car there, it’s useful for what we need to do, developing people, drivers, sponsors, which is exactly what it is there for. I’m very happy with our program.”