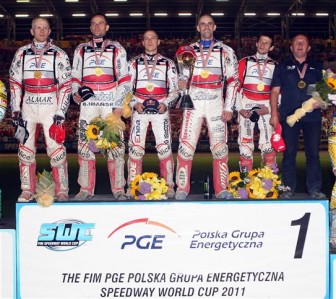 The  Poles were last after heat number eight, then Gollob came out and won heat nine. His team manager nominated the World Champion for the ninth heat and placed the Joker upon his head to get them back in the game.

The home crowd at Gorzow were delirious when their team came home to record a 51 point to 45 victory over the Aussies.

The Australian team were inspired by a 15 point event by Chris Holder, who was ably backed up by captain, Jason Crump who chimed in with 13. Troy Batchelor pumped out a solid 10 points, whilst Darcy Ward and Davey Watt mustered four and three respectively.

Gollob – with his double point win – scored 17, with Jarek Hampel scoring 11. Sweden were third with 30 points – Freddie Lindgren their best with 12, whilst the Danes were only able to manage 29, Kenneth Bjerre their best with 10 – triple World Champion Nicki Pedersen only able to score five points.