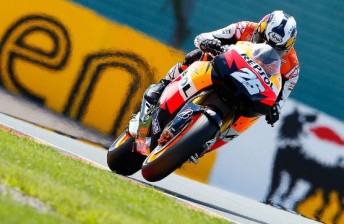 Pedrosa took his second win of the season

Dani Pedrosa has taken his fifth German Grand Prix victory at the Sachsenring.

An equally intense scrap for seventh was eventually decided in favour of Alvaro Bautista, while Nicky Hayden, Valentino Rossi and Colin Edwards rounding out the top 10.

Hector Barbera fought through the field after an opening lap off to take a well deserved 11th.

The podium place getters all took turns at the front of the race, with Pedrosa getting the best of the starts to lead the opening laps.

Stoner retook the ascendancy by lap five, having had to make his way past Pedrosa, Lorenzo and a fast-starting Dovizioso.

Having failed to break the field apart, Stoner then backed off his pace as the race drew towards half-distance – with Lorenzo retaking the lead on Lap13 of 30.

Pedrosa eventually made his way past the pair of former MotoGP World Champions to take the top spot with nine laps remaining, and was never headed for the duration. 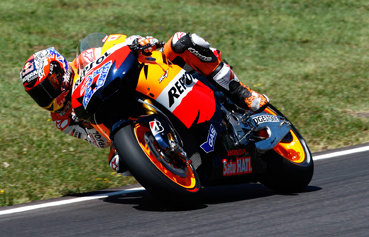