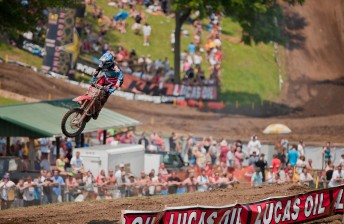 Australia’s Chad Reed has bounced back from a spectacular crash to finish fifth overall at the Spring Creek Nationals in Minnesota, the seventh round of the Lucas Oil AMA Pro Motocross Championship .

The TwoTwo Motorsports/Bel-Ray Racing rider got off to a good start, winning the opening 450 Class Moto ahead of Ryan Dungey and Ryan Villopoto.

That was all forgotten in the day’s second race. Reed made another good start in Moto 2 and pulled into the lead, but as the field headed for the track’s largest jump Reed hit some bumps and was catapulted off his Honda CRF450 into mid-air.

Incredibly, Reed re-mounted and battled back through the pack from dead last to 14th, and sealed fifth overall, one place in front of fellow Australian Brett Metcalfe.

“I hit some bumps and the front wheel just went out from under me,” said Reed.

“The next thing I knew, I was flying through the air. I’m just happy to still be here.

“It’s all about the championship so I wasn’t about to lie down and let these guys gain 25 points. I got back on and rode my best to come back from dead last to 14th.

“It was always going to be a fight, and now it’s definitely going to be that way but I’m excited for the rest of the races.”

While Reed has been cleared of serious injury he will spend the next few days recuperating ahead of next weekend’s Washougal National in Washington State.

Check the video of Reed’s ‘big off’