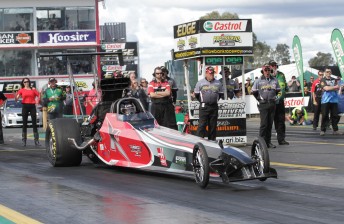 Jamie Noonan made the finals at the Castrol EDGE Winternationals

Noonan – whose father John won Top Alcohol at the Winternationals over 20 years ago stunned the drag racing world back in June when he popped his XE1/Noonan Race Engineering dragster to the top of the timesheets against some of the best racers in the country.

Seeing the racetrack for the first time since that June event – he backed that up taking a first round win over Sydney-sider Rick Gauci and then spectacularly drove around Rob Pilkington.

He was set to take on Steven Ham in the Final – Ham desperate to get a win up as well, especially on the rookie – who was running bid4jase.com stickers for his sick team man.

“We’re absolutely ecstatic with it,” said Noonan. “Back in June, my aim was to get through the first qualifying session without hazing the tyres – that was the goal the team had set for me. When I came in and they said I was on pole I couldn’t believe it. Everyone said to me, did it feel good, as I haven’t raced anything before I didn’t know what ‘good’ or ‘fast’ actually felt like.

“This weekend we came back with a lot of confidence actually. So to get through to the Final in our first time of asking really sets us up well for the future – I can’t wait for the next race now!”

It will be a few weeks until Noonan puts his Team BOC hat back on for the V8 Supercars, ironically at Queensland Raceway just next door to Willowbank.