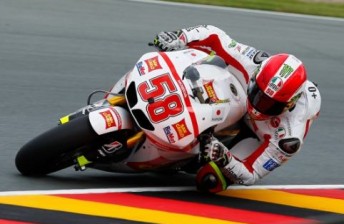 Simoncelli was the practice pace-setter

Italian Marco Simoncelli has topped both Friday practice sessions ahead of the German Grand Prix on another difficult day for Valentino Rossi.

Rossi’s day meanwhile began with a sizeable crash in Practice 1 that saw the nine-time World Champion report to the medical centre with cuts to his arm.

Returning for Practice 2, the Italian’s Ducati suffered mechanical problems, forcing Rossi onto his spare bike. The end result was the 12th fastest time.

The downhill, right hand Turn 11 that caught Rossi out in the morning also saw falls for Stoner, Pedrosa and Toni Ellias. A subsequent crash at Turn 1 required a spare Honda for Ellias.

Loris Capirossi’s return from shoulder and chest injuries on the Pramac Ducati was brief – the veteran Italian pulling out of the event after Practice 1, to be replaced by World Superbike rider Sylvian Guintoli.

See below for the full practice results