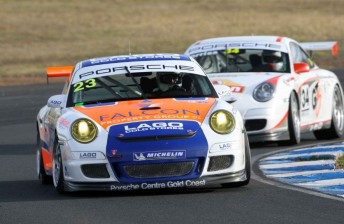 Lago leads Morriss out of Turn 2

Roger Lago has taken a comfortable victory in Race 1 of the Porsche GT3 Cup Challenge Australia at Eastern Creek Raceway.

The pole-sitter lost the lead to rival Jeff Bobik off the start, but regained the ascendancy when the latter was summoned to the pitlane for rolling on the start line.

Lago’s final winning margin over John Morriss was a fraction under two seconds, while Phil Morriss, John Goodacre and Jan Jinadasa rounded out the top five.

“I’m happy with the win. I just got lucky – I got a bad start and Jeff jumped it,” said Lago.

“John Morriss had a really good race today and was strong for a few laps.

“John pipped me for the fastest lap; but my car was strong, we looked after the tyres and we’ll try to do it all again tomorrow.”

Behind Lago, John Morriss trailed closely behind the leader for the majority of the race, finishing second and clinching the fastest lap – a new lap record for the category at the circuit.

“I was really pleased with the way I went today along with how the car felt,” said Morriss.

“I was fast in qualifying yesterday and I was getting a tow from Roger for a few laps, which helped me get my lap time down a bit.

“It gives me confidence for tomorrow. It was a good race; Roger had a bit more pace towards the end of the race, so we’ll work on that tonight and see what we can do for tomorrow.”

After qualifying eighth, Knight experienced a poor start but managed to come through the field to ultimately finished sixth, and was again the first 996 Cup Class competitor to the finish, ahead of Anthony Skinner, Modystach, Aaron Silluzio, Steven McFadden and fellow 996 Cup Class driver Paul Bolinowsky in 11th.

“I had a shocking start and got swamped by everybody. I eventually worked my way back through the field and had a bit of a battle with John Modystach, which I ended up paying for with my rear tyres going off towards the end of the race.

Races 2 and 3 for the Porsche GT3 Cup Challenge at the Shannons Nationals presented by Hi-Tec Oils event will be streamed live on the internet via itvlive.com.au tomorrow.