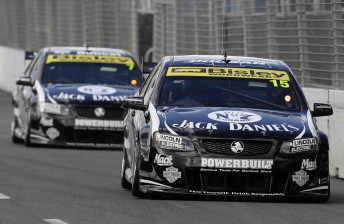 Richard Westbrook and Jörg Bergmeister have been recruited by Jack Daniel’s Racing for the Armor All Gold Coast 600 in Queensland this October 21-23.

Westbrook and Bergmeister are two GT sportscar aces that will team up with Todd and Rick Kelly respectively in their JDR Holden Commodores.

Westbrook is a two-time Porsche Supercar champion, the elite Porsche Carrera Cup class that races alongside the FIA Formula One World Championship, and is also a former FIA GT2 Champion.

Bergmeister has won the GT class in the American Le Mans Series on five occasions, and like Westbrook is a former Porsche Supercup champion.

Standing at 194cm tall, it is expected he will be the tallest driver on the grid at this year’s Armor All Gold Coast 600. He is also one of three official Porsche ‘works’ drivers attending, along with Long and Marc Lieb (IRWIN Racing).

Westbrook, who has been driving rear wheel driver Corvettes this year, hopes his learn curve is short.

“This year I’ve been racing an iconic American muscle car in the Corvette – now I’ll get to sample some Aussie muscle with a Jack Daniel’s Commodore,” says Westbrook.

“They are both V8s and rear-wheel-drive but obviously V8 Supercars are a unique beast. I expect it to take some getting used to but I will do my research and I can’t wait for the challenge.”

Bergmeister is looking forward to teaming up with Rick Kelly.

“From what I’ve heard about it and seen on TV, it looks like a really cool event and I am very excited that I get to be a part of it,” said Bergmeister.

“I think the concept of having international co-drivers is a great idea and hopefully will help the series get more worldwide recognition.”

The Armor All Gold Coast 600 on the Surfers Paradise street circuit will be held on October 21-23.