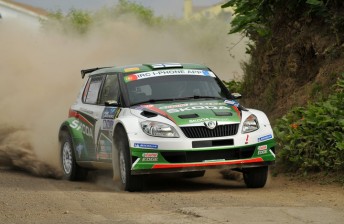 Juho Hänninen in front at the Sata Rallye Açores in Portugal

Juho Hänninen holds a narrow lead over Bruno Magalhães at the end of the opening day of the Intercontinental Rally Challenge (IRC) Sata Rallye Açores in Portugal.

The Škoda driver is just 4.3-seconds ahead of last year’s winner in Peugeot after the opening three stages.

Hänninen, the defending IRC champion, snatched first place from Andreas Mikkelsen when the Norwegian was slowed on stage two with powersteering failure, and extended his advantage at the wheel of his Škoda Motorsport Fabia Super 2000 with the fastest time on the day-closing superspecial stage in front of several thousand fans.

Despite his setback, Mikkelsen remains firmly in contention in his Škoda UK Motorsport Fabia, 1.4s down on Magalhães and a mere 5.7s behind Hänninen heading into Friday’s nine all-gravel stages on the mid-Atlantic island of São Miguel.

Magalhães underlined his threat with the fastest time on stage two in his Peugeot Sport Portugal 207. The Lisbon driver suggested he could have been closer to Hänninen in the overall classification had it not been for a bout of understeer on stage one, which caused his front tyres to experience significant wear.

Hänninen’s Škoda team-mate Jan Kopecký is fourth overnight. The Czech driver said he was still trying to restore his confidence on gravel having not driven on a loose-surface rally for 12 months. He reported finding optimum braking points being particularly troublesome.

Patrik Sandell is fifth overnight on his return to IRC action in his Škoda Sweden Fabia but far from happy. With the top five positions after stage two being reversed to determine the road order on Friday, Sandell will be forced to run at the head of the pack and forge a clean path through the surface gravel for the drivers behind.

Ricardo Moura heads the IRC Production Cup standings in a fine sixth overall at the wheel of his Ralliart Mitsubishi Lancer. The local hero reported a trouble-free start to the event but insisted that his priority was to secure maximum points in the Portuguese and Azorean championships, which he currently leads.

Guy Wilks is seventh at the end of day one and is well placed to cancel out the 29.3s deficit to Hänninen based on his more advantageous road position on Friday’s stages. The Peugeot UK driver dropped time on stage two to avoid being in fifth place at the end of the run.

Bryan Bouffier was hamstrung running first on the road in his Peugeot France 207 and is eighth overnight, 36.3s behind Hänninen. The Rallye Monte-Carlo winner said it had been a struggle to avoid losing too much ground and admitted his lack of knowledge of the Azorean roads and driving on gravel hadn’t helped his efforts to stay in the fight for victory. Previous Story Atkinson on a high heading to NZ