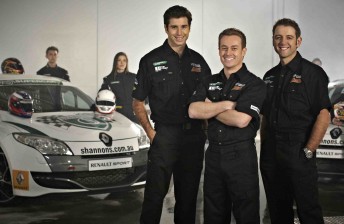 Todd Kelly is adamant that the winner of his team’s reality television program won’t be the slowest in this year’s Bathurst 1000.

The 2005 Bathurst winner says that the winner of the Shannons Supercar Showdown, who will score a drive alongside Grant Denyer in a fifth Kelly Racing entry, will not only be faster than some of the more experienced racers, they’ll raise eyebrows.

“If you have a look at the back-end of the field at Bathurst, it’s a little bit average to say the least,” Kelly told Speedcafe.com in Townsville.

“Whoever pops out and wins this show, they’ll clean-up a hell of a lot of those drivers up the back as far as pace and reliability.

“At the end of the day, we’ll see what happens, but Rick and I are both very surprise with the contestant’s capabilities and their potential. We’re quite confident that they’ll have a pretty good run up there.”

The Commodore VE that they’ll drive in Shannons Mars Racing colours is the car that Rick Kelly won Saturday’s race in Hamilton.

Kelly says that they will get minimal time in the car before their Bathurst debut.

“They won’t get a lot of time. We’ve got a couple of eliminations in the V8 Supercar, and then potentially one test day,” he said.

“When Rick and I hit The Mountain (for the first time), I was 18 and that was my second race in a V8 Supercar. Rick was very similar. You’ve got to start somewhere, and we’re just giving these kids an opportunity.”

The Shannons Supercar Showdown pitches 10 contestants against each other in a reality TV-style program that will see the winner score a debut drive in the Supercheap Auto Bathurst 1000.