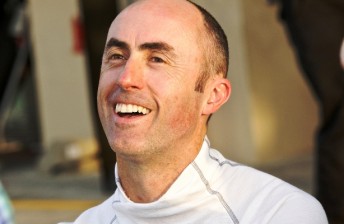 David Brabham is proof that you can teach an old dog new tricks.

The racing veteran, having competed successfully across Europe and America over the last 25 years, is enjoying his current job of racing the Sumo Power GT Nissan in the FIA GT1 World Championship.

Brabham has spent the last 13 years driving in the American Le Mans Series, winning back-to-back titles in 2009 and 2010, and is one of the most in-demand Le Mans 24-hour drivers, having won the event in 2009, and enjoyed class success on several occasions.

After Highcroft Racing , his American Le Mans Series team, closed its doors earlier in the year, Brabham was without a full-time drive and missed out on the Le Mans 24 hour race for the first time in well over a decade.

At the 11th hour a life line was found in the way of Sumo Power GT, a relatively new team in the competitive FIA GT1 World Championship. Brabham grabbed the opportunity and, after a steep learning curve, is starting to enjoy the fruits of his labour.

“The start of the season was understandably a bit of a learning curve for us all but we’ve grown and learnt at every round,” said Brabham.

“As we head past the halfway point, we’ve got three third-place podiums under our belts. Now, as everything comes together, all eyes are on progressing up the rostrum.”

Brabham arrived at Sumo Power GT as the new guy, but there were many other first timers working within the team. Not only did he have to ease himself into a new environment, but he had to learn about the category also.

“It’s a completely new series to me, the Nissan GT-R is new to me, working with Jamie [Campbell-Walter] and the Sumo Power GT team is new to me,” said Brabham. 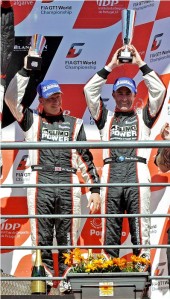 Brabham (right) with Campbell-Walters on the podium in Portugal

“Even some of the team personnel are coping with their first season in the series, so I walked into a very different scenario compared to what I have been used to with Highcroft Racing and working in the American Le Mans Series.

“Everything from the format of racing to all the rules and regulations, in a sense it’s been like re-learning everything again and, naturally, there are times when you get it right and times when you don’t.

“Learning everything fresh has been a challenge in some ways but that’s actually something I always enjoy.”

With three third place podiums to his name after only a handful of races, Brabham is enjoying the new series.

“I think the FIA GT1 World Championship is a fantastic series,” said Brabham.

“It’s full of action and a lot of pressure. With such short races you’ve got to perform every time you get in the car.

“You’ve got to get everything right and it’s been good for me to go through that.

“There’s a really strong, quality, group of cars and drivers. The guys are all good at what they do and different cars are good at different tracks which means there’s never one car dominating. It varies from track-to-track and that makes things interesting.”

Coming off a podium at the recent Spanish event, Brabham believes that Sumo Power GT is in with a shot at the title this year.

“The World Championship title won’t be decided until the last lap of the last round,” said Brabham.

“I think that shows how competitive it is. The way the rules are and the balance of performance bodes well for the future of the championship.

“I always think that when you win, it is when you are ready to win and we’re getting closer and closer with car 21. We’ll obviously be looking to get that race victory at the next round (in France).

“Everything is getting better and better. We’re still embroiled in the 2011 championship fight. We have the opportunity to win and that remains our focus.” 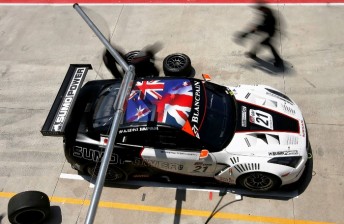 As for 2012, Brabham is far from being able to confirm his programme but it is definitely on his radar.

“FIA GT1 is certainly a championship I’d like to continue racing in but I’d also like to be involved in the FIA World Endurance Championship and even the American Le Mans Series.

“Of course at this stage it’s all very much up in the air but I am very keen to keep doing what I am doing as I’m enjoying every minute.”

Brabham and Campbell-Walters are currently sitting eighth in the championship with four events remaining.

The next round of the FIA GT1 World Championship is in France at the Paul Ricard circuit, July 16 and 17.

Brabham returns to Australia later in the year to drive for IRWIN Racing at Phillip Island and Bathurst.