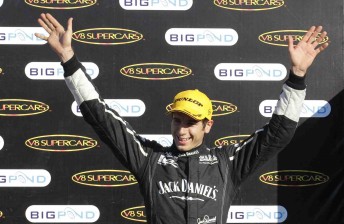 Rick Kelly admits that the workload of running a reality TV show has been taxing on his race team.

The 2006 V8 Supercars champion’s four-car team will expand to a five-car operation at Bathurst, with Grant Denyer to be joined by one of 10 young drivers in a Shannons and Mars-backed Kelly Racing Commodore at the Supercheap Auto Bathurst 1000 this October.

The ‘Shannons Supercar Showdown’ debuts on 7mate on July 23 and also features extensive behind-the-scenes footage of Jack Daniel’s Racing, both at the race track and at Kelly Racing’s facility in the Melbourne suburb of Braeside.

Kelly, who won Saturday’s race during the last event at Hidden Valley, been heavily involved in the creation of the unique program and admits that it has been a major workload.

“It has been a very busy month for us, doing a lot of filming for the reality TV show that we’re launching soon,” Rick Kelly said.

“It’s been quite taxing on us and the team.

“It’s long hours at the moment, but if we got asked again to do, we would. It has been a lot of fun.

“It has been a massive learning curve for everyone here because there’s been cameras around us for the last six weeks, but also for Todd and myself – learning lines and saying them in front of camera and learning how a TV series is made.”

For more with Todd and Rick Kelly, see below on the team’s preview video.