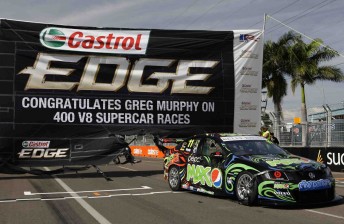 Greg Murphy will celebrate his 400th V8 Supercars race start this weekend, and to recognise the feat, Castrol EDGE congratulated the Kiwi veteran in a unique and Australian way.

The Sucrogen Townsville 400 main straight was taken over by Castrol EDGE and Kelly Racing, who held an Australian Rules-style banner for Murphy to drive through in his newly-liveried #11 Pepsi Max Crew Commodore.

“To reach 400 races is an amazing achievement. It’s scary to think how long I have been around – but my desire to win and perform at the absolute top level is as strong as ever,” Murphy said.

“This weekend, I hope that we can get out there and perform well, especially with the stunning new livery on the car.”

The Kiwi has been synonymous with Castrol products throughout his time in V8 Supercars, including his epic Bathurst 1000 victories with now team owner Rick Kelly – both of which were with Castrol.

It’s an association the company is immensely proud of both here in Australia and in Murphy’s homeland, New Zealand.

“On both sides of the Tasman, Greg is one of the strongest and most-respected personalities in V8 Supercars,” said Sue Dilger, Castrol PR and Sponsorship Manager.

“Murph has consistently delivered throughout his 12 years in the sport and it’s fantastic that he is forging ahead with Castrol again in 2011 aboard Kelly Racing’s Pepsi Max Crew Commodore.”