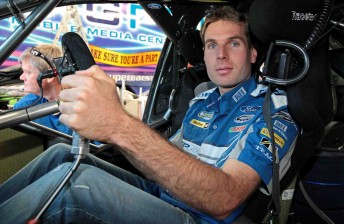 Australian IndyCar stars Will Power and Ryan Briscoe have been confirmed as starters for this year’s Armor All Gold Coast 600 on the streets of Surfers Paradise, October 21-23.

Both Aussies drive for the famous Team Penske and are in contention for this year’s US-based IZOD Indycar Series with Power sitting in second place behind Dario Franchitti by just 20 points and Briscoe not that many points away back in sixth place.

While the V8 Supercar Championship continues in Townsville this weekend, Power and Briscoe will be competing in the Hondy Indy Toronto in Canada.

Power returns to the Gold Coast with Ford Performance Racing, and will team up with Mark Winterbottom in the #5 Orrcon Steel FPR Falcon; while Briscoe continues his long association with the Holden Racing Team and is likely to partner Garth Tander.

Power, who was born and bred in Toowoomba about 2.5 hours west of the Gold Coast, has some unfinished business at Surfers Paradise having taken pole at the event three previous times in an IRL or Champ Car. Ryan Briscoe and Will Power

“To have a driver who was born and bred in Queensland being so successful in international motorsport is fantastic,” said Queensland Sport Minister Phil Reeves.

“Will stirred so many emotions for us during Champ Car and Indycar days in Surfers Paradise, and I am sure he will be keen to strut his stuff again in front of his home crowd.”

Ryan Briscoe’s return to the Armor All Gold Coast 600 as one of the renowned internationals is proof Australia breeds some of best drivers in the world.

Briscoe won the only IRL race on the Gold Coast in 2008 for Team Penske.

“Ryan Briscoe is a fabulous young driver who really did us proud by winning the IRL race in 2008 and I am sure his return to HRT will make them one of the favourites for the weekend,” said Reeves.

“We wish them all the best as they both try and claim their first IZOD IndyCar title and we look forward to seeing them here in October.”

Power and Briscoe join this year’s Indy 500 pole sitter Alex Tagliani, European stars Andy Priaulx, Marc Lieb and Dirk Müller, Joey Hand and Boris Said to be confirmed in the Armor All Gold Coast 600 field, with the remaining 20 drivers being announced in coming weeks, as well as ticketing options and world-class concert acts.