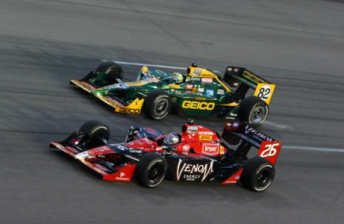 The IZOD IndyCar Series will return to California’s Auto Club Speedway for a night race in 2012.

It will be the first time since 2005 that the series has competed at the 2-mile circuit.

IndyCar CEO Randy Bernard said that the return of the California circuit will add to the diversity of the series.

“We feel the time is right to bring IndyCar racing back to Auto Club Speedway,” said Bernard.

“We want to maintain the diverse line-up of ovals on our schedule and the addition of Auto Club Speedway adds a great venue that was built for the high-speed, wheel-to-wheel excitement of IndyCar racing under the lights.”

“We look forward to building on the area’s history and tradition of open-wheel racing with new records and new races beginning in 2012.”

The IZOD IndyCar Series will announce its full 2012 schedule at a later date.