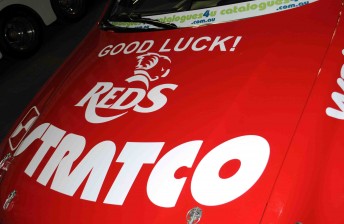 Stratco Racing driver David Reynolds will carry a message of support for Super Rugby team the Queensland Reds in Townsville this weekend.

The #16 Stratco Commodore will run special bonnet signage ahead of the Super Rugby Grand Final in Brisbane this weekend, where the Stratco-backed Reds will take on New Zealand side the Canterbury Crusaders.

“I wish the Reds all the best for the Super Rugby Grand Final this weekend,” Reynolds said.

“I know everyone at Stratco is really excited to see them in the final and as a team we will be cheering them on this weekend as well.”

The livery is part of the ‘Cool the Burn’ integrated product launch involving two leading brands. Central to the campaign is the simultaneous release of two limited edition flavours – Doritos Burn chili flavoured corn chips and Pepsi Max Ceasefire Lime – which have been specifically designed to work together. Going to Townsville for the V8s this weekend? Speedcafe.com is hosting a Sunday night after party in The Greenroom. CLICK HERE to pre-purchase your $10 ticket to the coolest party in town.