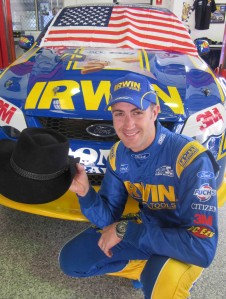 Australia's V8 Supercars will head to the USA in 2013

US hand tool and power tool accessory business IRWIN Tools has given a big tick to the expansion of V8 Supercars into America.

IRWIN, the major sponsor of Alex Davison’s Stone Brothers Racing Falcon FG, has a long history of motorsport sponsorship in America, having supported NASCAR team Roush Fenway Racing for several years and is the current naming sponsor of the IRWIN Tools Night Race in Bristol.

IRWIN Tools Asia-Pacific Vice-President Nick Pritchard says he will work closely with IRWIN’s head office in America to make the most of its association with V8 Supercars and its debut at the Austin, Texas circuit in 2013.

“V8 Supercars racing in the US is recognition that the product is really good,” said Pritchard.

“I’m looking forward to working with our American colleagues to make the most of the event over there.

“IRWIN in America has always invested heavily in motorsport – the guys in the US are going to be very excited to make the most of this new initiative.”

Pritchard can also see the business benefits of racing in America.

“From a business perspective these deals are really important as the market becomes more global,” said Pritchard.

“Our American IRWIN team will make the most of it and it’ll be great to see an IRWIN car racing on a US track again.  We have the IRWIN Tools Night Race in Bristol but, personally, I love seeing an IRWIN car going around.”

IRWIN Tools North American Vice-President of Marketing Curt Rahilly has seen V8 Supercars in the flesh (Sydney 500 last year) and is looking forward to the class competing in his homeland.

“To have Australia’s number one racing category come to America is going to be fantastic. I’ve seen the races in Australia, most recently at Sydney in December, and I know the fans here are going to love that sort of action.”

V8 Supercars will race in the United States from 2013, competing at the new Circuit of the Americas in Austin, Texas.