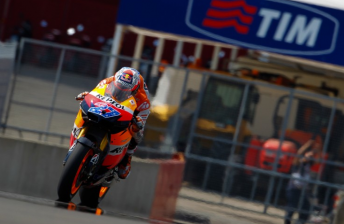 The Australian Honda ace put in a blistering fast lap to grab his 27th pole position in the premier class.

With uncertain weather conditions threatening, the MotoGP grid hurried to put down as many laps as possible and the Australian on the Repsol Honda set a new circuit record of 1m48.034s in the first half of the session, to qualify him almost half a second faster than Spies.

Spies managed to qualify second on the grid with a time of 1m48.479s – only his second visit to the Tuscan circuit.

The gap between Spies and Simoncelli was a lot smaller though – just 0.006s.

Andrea Dovizioso (Repsol Honda) will start the race from the fourth, just ahead of Jorge Lorenzo (Yamaha), who has earlier set the lap record in the morning practice. The Spaniard’s qualifying time was 1m48.756, over half a second slower than his earlier best time.

Completing the second row will be Colin Edwards on his Monster Yamaha Tech 3.