Home » Features » Where Are they Now » Niel Allen 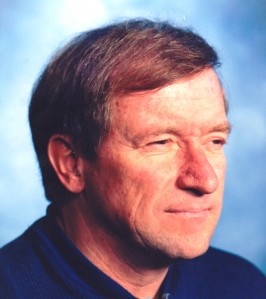 Niel Allen was one of the most famous names at Bathurst for over 30 years. No, he didn’t have nine race wins to his name, his car did not hit a rock, he didn’t swear to the crowd on the podium or involve himself in a formation finish; Allen was famous for recording the fastest ever lap time at the fabled mountain.

In 2010, after Craig Lowndes set the fastest lap ever seen, Roland Dane commented that Greg Murphy’s lap record of 2:06.8594 in 2003 shouldn’t have lasted as long as it did. Going on that comment, no one would ever have expected a lap record to last 32 years, Niel Allen’s time did.

Yes it was posted at Bathurst before ‘the Chase’ was installed in 1987, but the road surface continued to improve and cars continued to get faster, yet no one could beat it until John Bowe in 2002.

Niel Allen started racing in the early 1960’s when he raced sports cars and open wheelers. In 1970 he came third in the Sport Car championship and matched that result in the 1971 Tasman Series.

His interest in cars came courtesy of his father. Long before seat belts became mandatory he used to sit on his dad’s lap and steer the family Oldsmobile.

On the family property Allen began driving as soon as his feet could reach the pedals. Allen took this love of cars to the next step when he began racing.

“My first little bit of competition was a sprint race at Castlereagh Airstrip in an Austin Healey Six,” Niel Allen told Speedcafe.com.

“Initially I enjoyed it immensely; then a couple of years later, when I got an E-type, I started getting more serious.

“I raced in the club events at Warwick Farm. I enjoyed the short circuit it allowed me to find out what the car was capable of.

“I had a number of races on the full ‘Farm’ circuit.

“I’d give the (Lotus) Super sevens a run for their money, which was hard for an E-type.”

Racing started getting even better when Allen purchased a Lotus Elan from none other than Fred Gibson.

“I got a Lotus Elan Lightweight from Freddie Gibson, we had some wonderful times together,” said Allen.

“That was a sweet little car, particularly after the E-type; it was set up for racing.

“Fred and I was close, we developed a real trust for each other’s driving, so we were able to have some very, very close races.”

After racing throughout the mid to late 1960’s, Allen made a name for himself in the Tasman series. He put a quality team together, run by Peter Molloy, a man Allen regards as a racing genius, and started winning some races. In-fact his efforts saw him finish third in the 1971 Tasman Series. 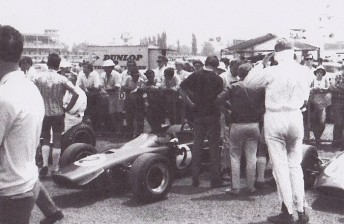 “They were a good couple of years,” said Allen.

“We worked hard getting the car up to a real stage of performance, it was very satisfying.

“I enjoyed winning the Tasman round at Sandown in 1970; we also won the New Zealand Grand Prix and races at Teratonga and Pukekohe in 1971 where I beat Frank (Matich), who was the man to beat.”

It was during this time that Allen had to juggle his racing with other commitments that made the results all the more impressive. But Allen’s career crowning glory, not that he rates this at the top of the tree, was that lap at Bathurst in 1970.

“It was wonderful,” said Allen.

“The problem with Bathurst back then was that it was very bumpy, quite different to what it is like now.

“Doing 300 kilometres an hour down the straight was heart in your mouth stuff.

“The McLaren was very fast, it was a very good car, but it shook a lot, vibrating would be a better word.

“The car would take off; it was just a matter of managing the vibrations and the torque.

“There were a couple of times during that lap that I managed to get it a bit sideways, the temptation is to take the foot off the throttle, but if you do that you’re nowhere.” 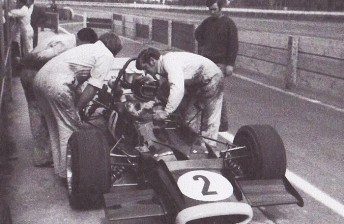 In 2011 a team and driver know if they are on a fast lap almost immediately thanks to the inbuilt technical equipment, but in 1970, despite the lack of technology compared to today, Allen knew he was on a good one.

“I knew it was pretty quick,” said Allen.

“I wasn’t shocked by the time as I was really concentrating.

“I got the car working properly and the time was very satisfying but I think I could have gone faster.”

Even though the track was lengthened slightly for the World Touring Car championship race in 1987, the biggest surprise about that lap record was that it lasted so long.

“I was surprised in a way,” said Allen.

“They changed the straight making is slightly longer, but the surface progressively became so much better, it was becoming quite a faster track.

“I certainly expected it would go a lot earlier than it did.”

Allen actually still holds the lap record on the original 6.172 kilometre circuit. When ‘the Chase’ was added in 1987 it made racing down Conrod towards Murray’s corner a lot safer.

“We were aware of the dangers given how Bathurst was at that time,” said Allen.

“They made the right decision to create ‘the Chase’, it is much safer today.

“The cars are much safer also; it means there isn’t as much seat of the pants stuff.

“The changes they’ve made over the years have made the place a lot safer, it’s a very different place now compared to when I drove there.”

Earlier in the year it was announced that F3 would return to Bathurst to race in 2012. As someone that knows of the dangers of racing open wheelers at Bathurst, Allen is probably the best qualified to give his opinion of its return.

“I have mixed feelings, I think it is probably okay but the boys that are driving there will need to be pretty careful,” said Allen.

“They would need to be fairly well practiced drivers as there is still a very real potential for danger there.

“I might be over sensitive, having had two crashes that nearly killed me, but you don’t want to see that happening to anyone.”

When Allen looks back at his career it is his time in the Tasman series that stands out as his favourite memory.

“It would be the Tasman wins, I really enjoyed them,” said Allen.

“It wasn’t just winning; it was having a good car, the enjoyment that went with both the preparation of the car, the competition and the people.

“I had a wonderful team of people that worked alongside me. As everyone in motorsport will tell you, if you have the right people then you are in with a shot.

“I also enjoyed racing at Warwick Farm. We set some lap records in a little Formula 2 car; we broke the lap record three times in three race meets which was very satisfying.

“I was also able to beat some big names during my career, just not ‘Pete’ Geoghegan though, he was too good.”

At the end of the 1971 season Allen decided to retire to look after his business and spend more time with the family, although he was lured back briefly in 1972.

“Retiring wasn’t difficult, my career was keeping me busy and I had a growing family,” said Allen.

“I was, however, offered a drive in 1972 which I decided to take. I did some early season racing at Warwick Farm and then raced at Surfers Paradise, but injured my ankle.

“That injury told me to stick to my original decision and stay retired.”

Throughout his life Allen was involved in the property development and construction industry where he ran his own business. Back then he had almost 400 employees, these days life is still busy but not as demanding.

”I help my son who is involved in my old industry,” said Allen.

“I have a few investments, I have some people wanting to discuss business issues with me, so I provide advice.

“Aside from that I try and spend as much time as I can with my family, which I cherish.”