Daniel Ricciardo says that all of his dreams have come true at once with confirmation he will make his Grand Prix debut in the next Formula One round at Silverstone.

Ricciardo, currently competing in Formula Renault 3.5 and Red Bull Racing reserve driver, has been given to Hispania Racing (HRT) ‘on loan’ for the remaining rounds of the 2011 season, replacing Narain Karthikeyan.

Speedcafe.com understands that Ricciardo will compete with HRT for the rest of the year, except for the Indian Grand Prix –  Karthikeyan’s home race. CLICK HERE for Speedcafe’s breaking story yesterday.

While Ricciardo will start the race as an F1 rookie, he has plenty of experience in the cars, having driven for Toro Rosso in each of the Friday practice sessions this year.

With both Toro Rosso drivers Sebastien Buemi and Jaime Alguersuari having competitive seasons, Red Bull could not fit Ricciardo into its line-up, making the move to loan him to Hispania.

“It’s a dream come true for me – for the first time on an F1 starting grid!” he said.

“I had to pinch myself a couple of times to be sure that it’s real. I’m excited and can hardly wait to drive at Silverstone. It’s a new challenge, a new experience, a new team, but I’m ready and will give of my best in any event.”

Hispania Racing team principal Colin Kolles said he is pleased to have the West Australian join his team.

“I’m happy to welcome Daniel to the team. I’m glad the team managed to conclude this deal together with Dr. Helmut Marko (Red Bull) who deserves my personal respect,” he said.

Ricciardo won the highly competitive British Formula 3 championship in 2009 and was runner-up in the 2010 Formula Renault 3.5 series. He was named Toro Rosso’s 2011 reserve after a successful outing with Red Bull in the Abu Dhabi young drivers’ test and this season is again competing in Formula Renault 3.5.

The British Grand Prix at Silverstone will be held next weekend. 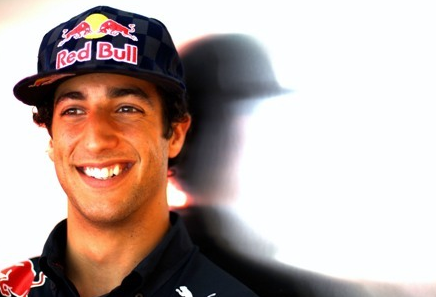