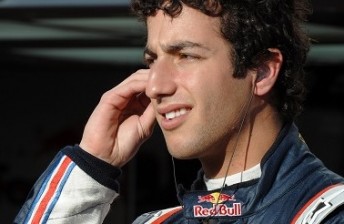 Australian Daniel Ricciardo will make his Formula One debut in the next round of the world championship at Silverstone for the British Grand Prix.

Speedcafe.com understands that an announcement will be made later tonight (UK time).

Early reports suggest that Ricciardo will replace Karthikeyan for the rest of the season, with Karthikeyan stepping back into the seat for the Indian Grand Prix in late October.

Ricciardo, a Red Bull Junior driver currently competing in the World Series by Renault class, will compete ‘on loan’ from Red Bull.

Ricciardo’s F1 debut will be at his ‘home’ GP, as he lives just down the road at Milton Keyes, near the Silverstone.

It will be a big day for Ricciardo tomorrow, who also celebrates his 22nd birthday.

Stay tuned to Speedcafe.com for more news as it breaks.