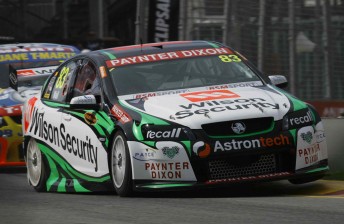 David Wall is in doubt for the third round of the Fujitsu V8 Supercars Series at Townsville after breaking his foot in a workplace incident.

The two-time Australian GT Champion took a fall during his regular job yesterday and is unlikely to get doctor’s clearance to drive the #83 Wilson Security Racing Commodore VE, prepared by V8 Supercars Championship team TDR.

With Wall on the sidelines and the Commodore already in Townsville for the event, TDR endurance driver Dale Wood is the most likely driver to replace Wall at Townsville.

Wall is disappointed to have sustained the injury so close to the event, but says that he is expecting to be fully fit for the next round at Queensland Raceway next month.

“I landed on my left foot the wrong way and I’ve broken a couple of bones at the top of my foot,” Wall told Speedcafe.com.

“I was hoping to soldier on and try not to be worried about it – put some freeze spray on it! But I went and saw the specialist, and he put a stop to that pretty quickly. I’m in a cast now, so that will be on for six weeks.

“I’m actually going to get a second opinion just to make sure, but it looks like I’ll be out for Townsville, but I should fine the next round at Queensland Raceway.”

With only a six week recovery time, Wall will fit to complete his endurance driver role with Karl Reindler at Phillip Island and Bathurst in the #21 Brad Jones Racing Commodore.

Wall is frustrated by the injury, considering the long break between the last Fujitsu Series round at Perth in April.

“We’ve been waiting a long time since our last round, and I’ve happened to hurt myself just before the next one,” Wall said.

“There’s not much I can do about it.

“My aim now is for Queensland Raceway. I’ll see by up there for the Townsville event, see what’s going on and see how Tony (D’Alberto) goes and assist with whoever drives my car.”

Next Story Daniel Ricciardo to make F1 debut at Silverstone