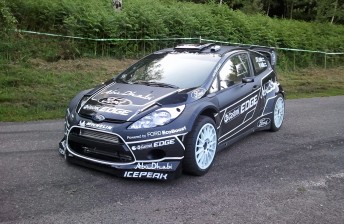 The 'All Black' Fiesta at the French test

The car, Ford’s challenger in the FIA World Rally Championship, carries the same design that it sported on the opening seven rounds of the series. However, the car’s base colour is black throughout, with white branding on top for Ford and its partners.
To complete the appearance, drivers Jari-Matti Latvala and Miikka Anttila and team-mates Mikko Hirvonen and Jarmo Lehtinen will wear black racesuits.

“A combination of the colour scheme and the car in a lower asphalt-specification set-up brings a sexy, mean and moody look to the Fiesta RS WRC,” explained Ford of Europe motorsport chief Gerard Quinn.

“We mean business in the asphalt rounds during the second half of the WRC season and our car portrays that in this livery.

“Our Fiesta RS WRC test cars are traditionally all-white with limited branding. This was one of the potential liveries we discussed when finalising the colour scheme for our entry cars at the start of the season. We opted for the design seen during the first part of the year, but decided to give the car a new look for the test in France by displaying this livery,” he added.

Quinn said the black design was initially for this weeks’ test only, but could be used again during asphalt testing later in the year. He also emphasised that the livery displayed on the team’s rally cars during the season so far would be retained for the remaining six rounds.