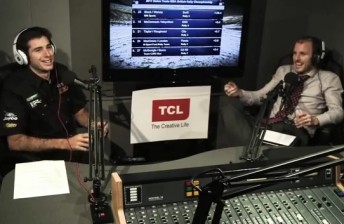 The 11th edition of V8 Nation has been on air – now, here’s your chance to watch the behind-the-scenes video.

Kelly and Dumbrell speak on a variety of topics in this episode, including Kelly’s “lucky” win at Hidden Valley Raceway, the penalties dished out in Darwin and why the pair keep running into each other on the circuit …

Also, Dumbrell reveals some of the detail behind his short-cut incident that he was involved in Saturday’s V8 race in Darwin.