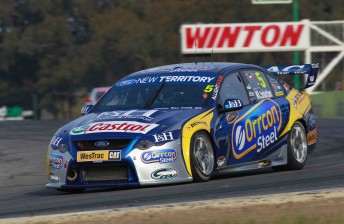 One V8 Supercars Championship team and a flock of Fujitsu V8 teams are testing at Winton Motor Raceway today.

After a strong event at Hidden Valley Raceway, Ford Performance Racing is conducting one of its six test days, hoping to unlock some soft tyre secrets.

All three of its entries are in attendance – Mark Winterbottom (Orrcon Steel FPR), Will Davison (Trading Post FPR) and Paul Dumbrell (The Bottle-O Racing) – plus the team’s respective co-drivers Steve Richards, Luke Youlden and Dean Canto.

While FPR is the only Championship team at Winton, there are lots of other cars on track.

Six Fujitsu Series cars are testing – one week later than expected. The teams were scheduled to test last week, but due to poor Winton weather, they delayed it until today.

Both the V8 Championship and the Fujitsu V8 Series will compete in the next V8 event at the Sucrogen Townsville 400 on July 8-10.