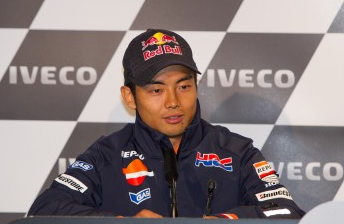 Honda has announced that Hiroshi Aoyama will replace Dani Pedrosa at this weekend’s MotoGP in Assen.

Pedrosa will miss his third Grand Prix in a row while he continues to from his broken collarbone sustained in France.

Aoyama has been racing with the Gresini Honda team this year and will move into the factory squad alongside Casey Stoner and Andrea Dovizioso.

After a solid start to the season, Pedrosa has dropped to fifth in the MotoGP standings on 61 points after six races.

Pedrosa is one of three MotoGP riders currently nursing broken collarbones, with Tech 3 Yamaha duo Colin Edwards and Cal Crutchlow both suffering the injury in the last two races.

Edwards returned from his crash in Catalunya to score a popular third place at Silverstone, while Crutchlow has travelled to Assen and is hopeful of racing a fortnight after his accident at his home Grand Prix.

Australian Casey Stoner leads the championship by 18 points over Yamaha rival Jorge Lorenzo. See below for a video interview with Stoner prior to the weekend’s action Previous Story Biaggi turns up the heat at Aragon