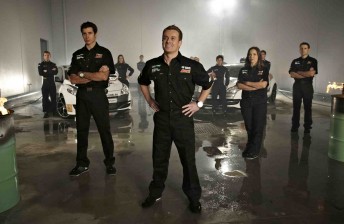 Todd Kelly says that a fifth entry at Bathurst will not weaken his team’s focus at the Bathurst 1000 this year.

Kelly Racing announced today that it will run a fifth Commodore VE at Australia’s ‘Great Race’ in October, with television personality Grant Denyer enlisted as the lead driver. His team-mate will be awarded to one of 10 contestants competing in the ‘Shannons Supercar Showdown’ – a reality TV-based program designed to unearth a young driving talent.

CLICK HERE for full details on the Shannons-Mars Racing entry and the Shannons Supercar Showdown.

To combat the extra workload at Bathurst, Kelly Racing has secured the services of Dean Orr to manage the entry in the lead-up to the event, plus running the car at Bathurst.

Orr has been a key player at a number of V8 Supercars teams over the years, including Perkins Engineering, Dick Johnson Racing, Paul Weel Racing and Lucas Dumbrell Motorsport.

Orr has been charged with the responsibility of sourcing and managing the staff.

Todd Kelly, driver of the #7 Jack Daniel’s Racing Commodore, says that the fifth entry will be run at a high level, and will not take away from its four regular entries.

“Bathurst is the event that we look forward to all year as our biggest race,” he said.

“All the workshop-based staff across all the departments come to Bathurst because we really need all the manpower that we can get at an event as big as that.

“We already have a lot of extra guys at Bathurst that can assist in running a fifth car there, but certainly not enough to do it properly.

“So we were very lucky that Dean Orr became available and was keen to join us and have a crack at this program.

“We didn’t muck around when he became available, we grabbed him straight away and the management of that whole fifth car in terms of the staff, the car, the organisation, is all his responsibility.

“That means that the fifth car can be run at the level that we want it to be run and is a professional and organised entry for Bathurst. It also means that it will not impact on the running of our four full-time cars both at the workshop and at the track at Bathurst.

“We really couldn’t be happier with how the whole thing has fallen into place and the people that we have been able to assist with the program.”