Home » News » NASCAR » Red Bull to pull out of NASCAR

Red Bull to pull out of NASCAR 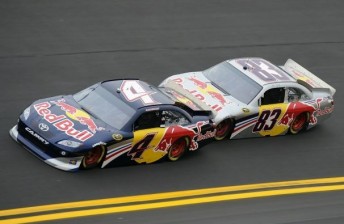 Red Bull will pull support from its NASCAR Sprint Cup team at the end of this season, according to an Associated Press report.

The Red Bull Racing Team, which has won just one race since its debut in 2007, is both sponsored and owned by the Austrian energy drinks company.

It is understood that NASCAR’s declining television ratings in the 18-34 age demographic has played a key role in Red Bull’s decision.

The team’s Toyota Camrys are currently being driven by Brian Vickers and Kasey Kahne, with the latter using the squad as a one-year stop-gap between leaving Richard Petty Motorsport and joining Hendrick Motorsports.

Red Bull Racing Team has issued a statement about the situation, all but confirming the exit of its owner.

“Red Bull Racing Team is currently seeking outside investors as we evaluate next steps in the Sprint Cup Series,” read the statement.

“We are not at liberty to comment on details while negotiations are under way.

“Red Bull fully supports NASCAR and will continue its investment in America’s premier form of motorsports for the remainder of the 2011 season.

“The team’s focus will not waiver as we fight for victories and a position in the 2011 Chase for the Sprint Cup.”

The team’s short history began with a horrendous debut season in which team drivers Vickers and AJ Allmendinger failed to qualifying for a combined 32 races.

Allmendinger was dumped by the team before the completion of 2008 in favour of fellow ex-open wheel driver Scott Speed, who in turn was let go in the 2010/11 off-season – prior to the completion of his contract.

Vickers won a race and made the coveted Chase in 2009, but was forced to sit out the majority of last season after being diagnosed with blood clots.