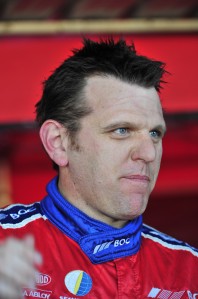 The ash cloud that has caused air traffic chaos over Australia in the past week is still a thorn in the side of at least six V8 Supercar drivers.

Team BOC’s Jason Bright decided to spend an extra two days in Darwin to relax and go fishing. Right now he’s stuck in Alice Springs as his connecting flights to Melbourne have been grounded.

“We were in with a shot of making it,” said Bright on Twitter.

“Plane has all the tyres and is full of fuel, but I’m here with a hundred passengers stuck.

“Now if they could just find our bags we will be off to motel.”

Orrcon Steel Ford Performance Racing’s Mark Winterbottom is back home in Melbourne. However, he’s due to leave for Townsville as part of the Car’s 2 Movie Premiers across the country.

Originally on a direct flight to Townsville. He has been rerouted via Brisbane.

“Off to Townsville potentially,” said Winterbottom.

“The ash cloud is causing havoc in Melbourne and now my flight time has blown out by four hours!

“My event in Townsville is not until tomorrow, but I still need to make my connecting flight in Brisbane.

“I might need to ask the pilot if he’s seen ‘Days of Thunder’ and tell him to ‘go high’ when he sees the cloud!”

“At least I beat something this week. Don’t think we will get home tonight.”

“Now do some TV stuff for V8Xtra and then start the A-Team part of journey home!!”

Meanwhile back up in Darwin remains Will Davison (Trading Post Ford Performance Racing).

“Doesn’t look like I’ll be flying home from Darwin in the morning dammit!,” said Davison on Twitter.

“Great day of fishing anyway, got sun burnt and saw some thumper crocs.”

As well as the drivers currently affected, others including Greg Murphy (Pepsi Max Crew) and Lee Holdsworth (Fujitsu GRM), who had interstate plans for sponsor, public and business commitments are all waiting to hear if they can travel.