Ryan Walkinshaw eyes move down under 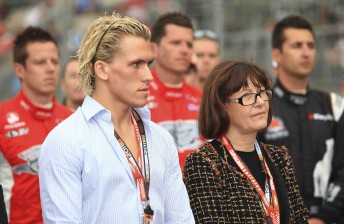 Ryan Walkinshaw, eldest son of the late Tom Walkinshaw, has hinted that he could move to Australia to potentially oversee the running of the Walkinshaw Racing empire.

While his mother Martine was in Darwin over the weekend overseeing what was a horror event for the Toll Holden Racing Team, the eldest son of the HRT founder suggested that a move to Australia could be on the cards.

“Looks like I am going to have a double winter this year.”

Further Twitter posts confirmed Ryan Walkinshaw’s enthusiasm for the factory Holden squad his father founded in over two decades ago.

“Dont worry about HRT, we are rebuilding it back to its former glory, hence the hard decisions we had to make.

“We have great drivers and a new morale boost in the team, now we just need to get the car up to scratch and get podiums.”

At Hidden Valley Raceway over the weekend, Australia’s most successful race team endured a nightmare run of results. Darwin was not Martine Walkinshaw’s first visit to a V8 Supercar event, with both Martin and Ryan attending the Clipsal 500 in March.

Toll HRT’s horror run at Hidden Valley came in the first race meeting since the departure of CEO Craig Wilson and Team Manager Rob Crawford, with Mike Henry leading the team in Darwin for the first time as Race Operations Manager.

As Walkinshaw hinted at a move to Australia closer to Walkinshaw Racing’s headquarters in Clayton, Melbourne, key HRT figures remain defiant. Drivers Garth Tander and James Courtney as well as senior team staff have insisted that morale in the outfit is high, despite the disappointing run in Darwin.

Next Story Garth Tander's future to be discussed this week

Previous Story What about the fans?! V8 team mechandise