David Sera snares a lucky one 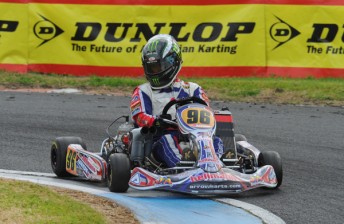 David Sera had luck on his side on his way to victory in Pro Gearbox (KZ2) Pic: AF Images

Since making his debut in the CIK Stars of Karting Series presented by Castrol EDGE David Sera has been the driver to beat in the Pro Gearbox (KZ2) ranks.

The Monster Energy-backed Arrow pilot claimed his second consecutive round win in Melbourne at the weekend, however, a pair of 16 year-olds nearly stole the show.

Youngsters Macauley Jones and Chris Hays showed superior speed over the field during the pair of 27-lap finals on Sunday but Sera’s luck was on his side.

Jones chased down and passed Sera in the opening final of the day to take the win. Then in the second encounter it was Hays’ turn to shine as he replicated Jones’ feat, however, there was heartache to come for the Vodafone-backed Tony Kart pilot.

Holding a commanding lead over Sera and Jones, who had recovered from a sluggish start that dropped him from first to ninth, a brake issue forced Hays to drop well down the order with only a few laps remaining. The demise of Hays allowed Sera to claim the round win ahead of Jones in his and Scott Taylor.

Sera was full of praise for the youngsters on the podium.

“Chris Hays had a lot of speed in the final, it was unlucky for him that he had some brake issues and I was fortunate enough to end up with the win,” said Sera.

“Macauley (Jones) has certainly improved his game since last round and was very fast here in a test day the other week. He’s a young kid of the future and there is no doubt that we’ll see him on the top step of the podium in the near future.”

In the Pro Light (KF1) final it was Cian Fothergill who charged his way from the back after an incident on turn one to claim the victory ahead of James Macken and series leader Jake Spencer.

While the results show that Pierce Lehane claimed his second round win of the 2011 series, this weekend’s victory was far from a domination by the CRG pilot.

Lehane was challenged by surprise packet Joseph Burton-Harris during the early running of Sunday’s second final. While Lehane eventually pulled clear of the Smart Device-backed driver, it was Joseph Mawson who was the late race charger.

Mawson showed great speed to pass Burton-Harris in the late stages of the 27-lap affair before closing in on his archrival. Unfortunately, for Mawson he couldn’t quite make the pass for the win on the final lap and was forced to settle for second.