Home » News » Bikes » Biaggi turns up the heat at Aragon

Biaggi turns up the heat at Aragon Biaggi finished second to fellow Italian Marco Melandri in Race 1, after losing the lead with just five laps to go as his tyres faded.

The tables were turned in Race 2 however after a late-race mistake from the Yamaha rider allowed Biaggi to take the win.

“I didn’t get one before because the other guys did a better job than me.

“This win came after a very strong race, I had a good pace all the way to the end, so the changes we made to the bike’s suspension made it work better than race one.

“We should have done it before for race one but I’m happy with today’s results.”

A third place finish in Race 2 ensured Checa still holds a 43 point lead in the championship standings despite crashing out of Race 1.

Biaggi’s Aprillia team-mate Leon Camier could manage just eighth in Race 2 after taking his third podium of the year in Race 1.

The Briton trails Checa, Biaggi, Melandri and Eugene Laverty to sit fifth in points after 14 races.

Leon Haslam remains sixth in the standings, despite struggling home in ninth place in both races at Aragon.

It was again slim pickings for the Australians, with Troy Corser scoring a 10th and a DNF, Chris Vermuelan a 12th and a 14th, and Mark Aitchison a 15th and a 12th. 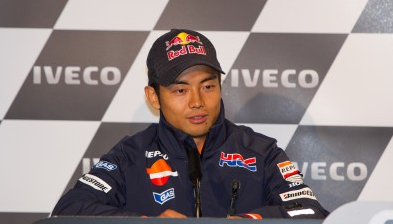