Home » News » Rally » Tight at the top in Greece

Tight at the top in Greece The Acropolis Rally is set for a thrilling finale with the top four drivers covered by a little more than 20 seconds with five stages left to run.

Solberg began the day with a lead of 51.6-seconds but was held back by running first on the road and an overshoot on the day’s second stage. With Ogier making the most of running fourth on the road on a slightly cleaner surface, Solberg was unable to fend off the flying Frenchman who took the lead on stage 10.

But when Ogier reported losing time in the dust clouds on the day-closing night stage, Loeb found himself in the lead. As a result he will start first on the final day, which means he will have to clean the road of the loose surface gravel and faces losing precious seconds.

“We will see what will happen,” said Loeb.

“We will continue to push and try and do our best.”

Mikko Hirvonen started day two in third overall in his Ford Abu Dhabi World Rally Team Fiesta RS WRC but slipped to fourth during the afternoon stages. He has vowed continue to battle on the final day.

“We are in a good position for tomorrow and we can still fight,” said Hirvonen.

Henning Solberg fought back from an early brake problem to complete day two in fifth position with M-Sport Stobart team-mate Matthew Wilson sixth having plagued for much of Saturday by a misfire.

Ex-Formula One world champion Kimi Raikkonen continues to impress on his Acropolis Rally debut by maintaining his bid for a points’ finish in seventh overall in his Ice 1 Racing Citroen.

Jari-Matti Latvala endured a miserable morning when he lost turbo boost pressure in his Ford Fiesta RS WRC. However, repairs at midday service in Loutraki restored the car to full working order and the Finn was able to go fastest of all on stage 10 plus the Nea Politia night stage. 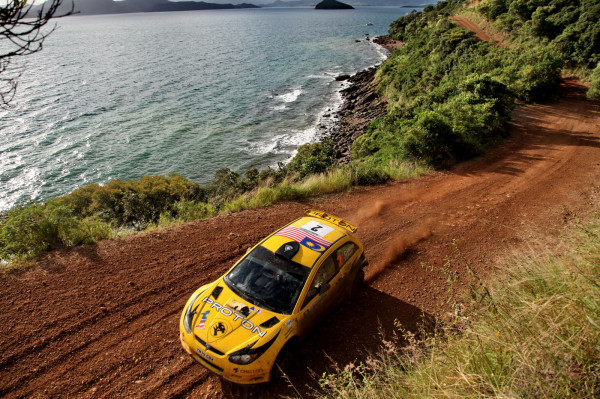