The result equals the sixth place finish he took at the Bathurst 1000 in 2007, partnering Steve Owen.

The 24-year-old started 14th and ran a conservative strategy, picking off a number of drivers to move into the top 10.

The Wilson Security Racing drive took advantage of the late-race restart crash, moving from 10th to sixth place with five laps to go.

“We were a little bit lucky, I guess, considering all of the excitement that was going on at the restart, but you’ve got to be there to get that result too,” D’Alberto said.

“The car hasn’t been too bad this weekend. We didn’t get the most out of it in qualifying – I made a bit of an error at turn one and that cost us some time. 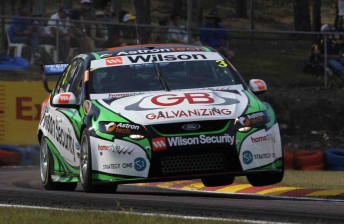 “In the race, we don’t have it perfect, but when you look at the calibre of cars around us, we were travelling OK.

“I was getting held up a little bit at the end by Will (Davison), but I was just trying to hold station. I wanted to finish the race well because we’ve had such a difficult year, we just need to get some results under our belt to build onto a good end to the year.

“We’ve exceeded our goals today, and now we need to do it more often.”

Team engineer Adam De Borre says that the team’s test at Winton last week, and the return to the hard compound Dunlops, has proven rewarding.

“It’s nice to come back to the hard tyre, which we have felt that the car is very competitive on,” De Borre said.

“The test we had prior to this event was very productive. We tried some different set-ups and set-up philosophies, and some of that has worked now.

“We’ve still got a lot more work to do, so to have a result like this when we’re barely scratching the surface on development is very encouraging.”