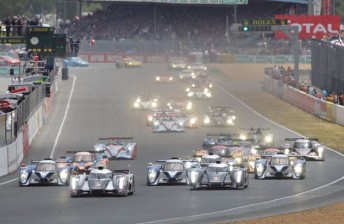 The comments come following Craig Lowndes’s return from Germany, where he attempted to contest a four hour VLN series race at the Nurburgring with Team Joest’s Audi Race Experience squad.

Although Lowndes crashed out of the event in qualifying, the 36-year-old has made it known that he’s keen for more European endurance racing experience.

With team-mate Jamie Whincup having previously expressed a desire to dabble in the American racing scene, Burgess says that one-off events can be a positive thing for both the drivers and his team.

“We definitely encourage it, Roland does, and I do too,” Burgess told Speedcafe.com of his drivers racing overseas.

“I think it’s like a mini holiday for them, and when they come back they’re recharged.

“Craig is definitely like that, once he’s been away on the Safari, at the Nurburgring or wherever, he comes back revitalised for what he’s doing here.”

Whincup and Lowndes currently sit first and second in the 2011 V8 Supercars Championship after five events.

For more with Adrian Burgess, including his thoughts on the team’s championship chances and the fortunes of Triple Eight customers Paul Morris Motorsport, CLICK HERE.

Next Story Courtney to give new Arai its Australian debut