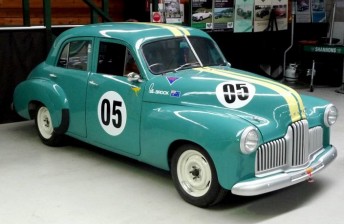 Peter Brock’s last circuit racing car is set to go under the hammer next month in Melbourne.

The Holden 48-215 was raced by Brock in the 2006 Goodwood Revival meeting in England – just one week before he was killed in the Targa West Rally.

Owned by Phil Munday, the car was built by former Holden Dealer Team engine guru Ian Tate especially for the event, and is expected to fetch bids in the $300,000-$350,000 range.

With Goodwood Revival rules allowing engine capacity to be increased by up to 20 per cent from standard, the car features a 2.4litre engine with a Vauxhall crankshaft and a Wade-style camshaft, breathing through triple 44mm SU carburettors and Facey extractors and a straight-through exhaust. Goodwood rules allowed for some modifcations

Brock qualified fifth and finished fourth in the main St. Mary’s Trophy in the 48-215, leading to being awarded the ‘Spirit of Goodwood’ trophy.

According to reports of the time, Brock had originally been asked if he could bring the Austin A30 with which he started his racing career to the Goodwood event. The Holden was subsequently built when the nine-time Bathurst winner informed the event organisers as to the level of modification his A30 had received.

The 48-215 will be auctioned by Shannons at the Australian International Motor Show in Melbourne on Sunday, July 10.