Schumacher ‘laughing and crying’ in fourth

Schumacher ‘laughing and crying’ in fourth 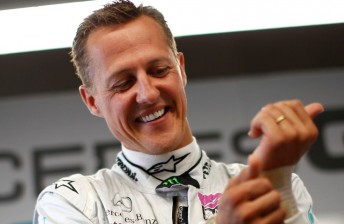 Schumacher equalled his best result since 2006

Michael Schumacher says he has ‘one eye laughing and one eye crying’ after taking a season-best fourth place in the Canadian Grand Prix.

Schumacher ran as high as second with five laps to go, but fell behind eventual winner Jenson Button and Australian Mark Webber on Laps 65 and 67 of 70 respectively.

The passes were both executed with the help of the DRS into the final chicane, and ensured Schumacher would equal his best result since returning to the sport last year – while leaving the seven-time World Champion tantalisingly short of the podium once again.

The German had run among the top five in the opening green flag laps of the race, before being shuffled back to 12th position in the changes from wets to intermediates and then back again prior to the Lap 25 red flag.

Schumacher then clawed back into podium contention by being among the first to pit for intermediates (upon the red flag restart on Lap 35), before passing Nick Heidfeld and the battling Kamui Kobayashi/Felipe Massa before the final change to slick tyres.

“I am leaving this race with one eye laughing and one eye crying, as I am not sure if I should be excited or sad about it,” said Schumacher.

“Having been in second place towards the end, I would obviously have loved to finish there and be on the podium again.

“But even if it did not work out in the very end, we can be happy about the result and the big fight we put in.

“A good strategy after the red flag made it possible, and I am very happy for our team.”

Schumacher also said he enjoyed putting on a show for the hardy Canadian fans.

“I would like to send a big compliment out to the spectators who stayed with us in those difficult circumstances for so long and even cheered us up,” said Schumacher.

“That was impressive, and I am glad that I could play my part in entertaining them.”

Michael Schumacher says he has ‘one eye laughing and one eye crying’ after taking a season-best fourth place in the Canadian Grand Prix.