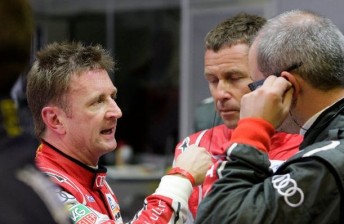 Audi Sport star Allan McNish has defended his driving that resulted in the #3 Audi R18 crashing out of the Le Mans 24 Hours in the second hour.

The incident occurred heading into the Dunlop Curves, and saw McNish dive to the inside of both his team-mate Roman Dumas and the GTE Am Ferrari driven by Anthony Beltoise.

CLICK HERE for Speedcafe.com’s race report and the race result

Contact between the Audi and Ferrari sent McNish spearing into the outside tyre barriers, which subsequentlysent the R18 flipping into the sky.

Speaking to the media after returning to the circuit on Sunday morning, McNish said he did not feel the move was overly ambitious.

“From where I was sitting going into that corner there was not one bit of me that thought I was going to have a crash,” said McNish.

“What you see on the television camera is a very different angle to what you see in the cockpit.

“From my point of view it wasn’t a risk to get into that corner. And Anthony said that he didn’t see me at all.

“I had no plan to pass the Ferrari, I was just looking to pass one car and to me it was a safer solution than to try to squeeze in with Timo (Bernhard). With the momentum it wasn’t a problem.

“I’ve made that overtake many, many times before and I saw other drivers doing it in the race afterwards when I was resting.

“Obviously there was an accident but at that time I wasn’t thinking it was like that.”

“Obviously the closed-cockpit design does not give as wide a field of view as the open prototype,” said Ulrich.

“But there are technical regulations we have to follow in the construction and the drivers were involved in the design from the earliest stages of development.

“I don’t think that the accidents were related to visibility.”

The race was won by the team’s third entry, driven by Andre Lotterer, Bernoit Treluyer and Marcel Fassler.

See below for video of McNish’s crash