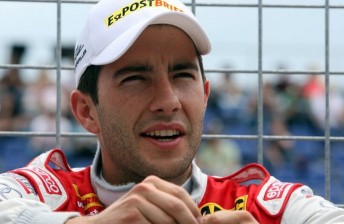 Audi Sport Team Joest has lost the second of its three factory entries at this year’s Le Mans 24 Hour in a massive accident.

Earlier Scotsman Allan McNish destroyed his R18 TDI against the barriers after colliding with a GT class entry in the opening hour.  CLICK HERE for Speedcafe.com’s story and video on that crash .

German Mike Rockenfeller driving the #1 Audi was driving at full speed down the fast stretch leading up to the Indianapolis corner just prior to 11pm local time.

He caught up to the slower Robert Kauffman #71 AF Corse Ferrari 458 which moved across into the path of the Audi. The R18 TDI snapped left and hit the Armco head-on and then veered over to the right hitting the barriers on the opposite side of the track extremely hard.

Incredibly, Rockenfeller extricated himself from the car and climbed over the barriers. Circuit medical staff immediately transferred the 27-year-old to a local hospital for further assessment.

“The only information we have is that Rockenfeller left the car himself.

Video of the Rockenfella accident