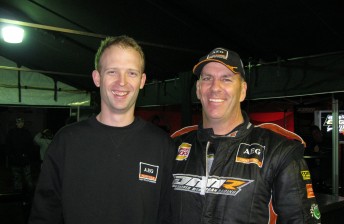 Darren Morgan is now celebrating becoming a two time ANDRA Top Fuel Champion, but the Mildura racer deferred to his Crew Chief, Ben Patterson – who has become the youngest Title winning Crew Chief in any Top Fuel Championship in the world at the age of 22.

“It’s a pretty neat deal isn’t it?” Morgan said. “Ben’s probably the hardest working crew chief as well. He’s still finishing off his studies and balances our racing program with that.

“The sky is the limit for him in professional drag racing.”

The softly spoken Patterson was still coming to terms with his achievement.

“It’s a fantastic achievement and one that I am very proud of obviously, although it hasn’t sunk in,” he said. “Today was so busy I haven’t really had time to think about it.”

Patterson is a Mechanical Engineering student at Swinburne University and divides his time between Melbourne to attend to studies, then on weekends heads to the DMR base at Mildura.

“I’m all over the place,” he laughed. “It’s tough with Mildura and Melbourne being so far from each other, but we make it work. There isn’t a day that I’m not thinking about what we can do to make this car and team better.

“We’ve worked hard on our image this year and stepping it up, which is working and I’m just the crew chief, I’m not the one pedalling the car down the track!”

Last year, Patterson went to the USA and worked on the Lance Larson ‘In N Out’ Burger Funny Car team and also spent time with Morgan Lucas’ Top Fuel operation and is set to return very soon.

Morgan praised the rest of the crew – who have travelled en masse to Willowbank this weekend.

“They are all volunteers on our team,” he said. “It’s pretty emotional for me to have all these guys here and with us to celebrate this weekend. They work so hard and dedicate everything to us and this AEG Powertools Hungry Jack’s team.

“We should have wrapped up the Championship at the last round, but it was cool to do it at the Castrol EDGE Winternationals in front of all our sponsors.

As for on-track – Morgan suffered massive tyre shake in the only Top Fuel run at the Winternationals this afternoon and will hit the track tomorrow morning ready for the remaining qualifying sessions.

“For us today was a bit of a let down to be honest, I was keen to step on it in the first run, but had tyre shake off the line and it was so bad, it broke all the brackets at the front of the car.

“But we’ve got the number one on the car for the next 12 months and that’s all that matters now.”