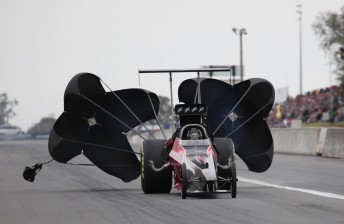 Noonan, whose father was the 1997 Winternationals Champion, upstaged all of the fancied ANDRA Pro Series Top Alcohol runners with his very first run off the truck – getting down the quarter mile in 5.562 seconds at 399 kilometres per hour.

None of the other Top Alcohol runners were able to touch the 34 year old’s time in the latter stages of session one or in session two. Noonan remains on top despite striking trouble on the startline and not setting a time in the second session.

Should he remain on top of the pile after tomorrow’s two qualifying sessions, it will be a stunning entry to the sport.

The good run continues Noonan’s wave of success in 2011. Jason Bright’s outstanding start to the V8 Supercars season – which has included two race wins and numerous podiums – has set the V8 scene on its ear.

His self-developed Noonan Race Engineering billeted cylinder head has already won an American Championship and it would seem it is making a solid beginning in Australian drag racing as well. Next Story Shane Tucker: I still aim to make the field