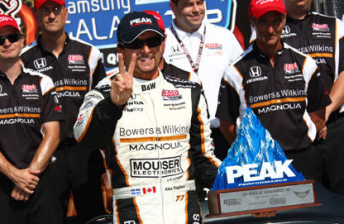 Alex Tagliani has secured his second IndyCar pole in a row

Tagliani was recently confirmed as a driver for the Armor All Gold Coast 600, signing with Kelly Racing.

Australian Will Power (214.716mph), who won the pole for all four road/street races to kick off the season will line-up third alongside former Formula One driver Takuma Sato (214.470mph). The qualifying performance is Sato’s best IndyCar performance.

JR Hildebrand, who went so close to winning the Indy 500 last month, will line-up 11th.

The grid for the second of tomorrow night’s races will be determined by a random draw after the first race.

Power, currently leading the title, predicts that the title will again go down to the wire, judging by the competitiveness of this year’s series.

“I’m sure it’s going to go down to the last race,” said Power, who was beaten in the season finale at Homestead-Miami Speedway by Franchitti.

“Just so many strong drivers and teams this year. You can see how mixed up it can get, especially with double-file restarts. You can be leading and then taken out, it’s that easy. So I see a very mixed-up season with a lot of different winners.”

See below for the complete grid for the first leg of the Texas Twin 275s.

Also, see below for a special question and answer video with Australian Ryan Briscoe.