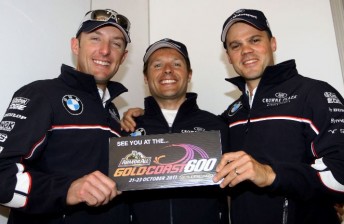 From left: Hand, Priaulx and Muller will turn from team-mates to rivals on the Gold Coast

International stars Andy Priaulx, Dirk Müller and Joey Hand have been confirmed as starters in the Armor All Gold Coast 600.

Priaulx will rejoin TeamVodafone while Müller and Hand will both be a part of Dick Johnson Racing’s Jim Beam-backed Ford team on the streets of the Gold Coast.

At Le Mans this weekend the trio will drive a BMW M3 GT.

The three join this year’s Indy 500 pole-sitter Alex Tagliani as the confirmed drivers in the Armor All Gold Coast 600 field with the remaining 24 drivers being announced in coming weeks.

A world-class field of 18 internationals took to the track as co-drivers with regular V8 Supercar drivers last year – the number increases to 28 this year with every Supercar including an international star.

Priaulx was the most successful international driver on the Gold Coast last year with a second in Saturday’s 300km race and a 10th place finish with his co-driver Craig Lowndes on the Sunday.

He is a former three-time world touring car champion, European Touring Car Champion, Nurburgring 24-hour winner and made Bathurst appearances in 2002, 03 and 2009.

“I love street circuits and this is definitely one of the best I have driven on. I would have been very disappointed if I had not been asked back by Roland Dane and Triple Eight this year, so thank you for the invite and also a big thank you to BMW for letting this happen.”

Hand is a 32-old US racer who won the Daytona 24-hour earlier this year with Scott Pruett, Memo Rojas and Graham Rahal.

He overcame a couple of big accidents early in his career to punch his way back and currently be regarded as one of the best sportscar racers in the business.

“To me the key to this race is the fact I am always anxious to compete against the best drivers in the world, and this is just the opportunity I will have in the Gold Coast,” said Hand.

“ I love the idea of the organisers inviting the best drivers from many series around the world.  There are some challenges there as the cars are right hand drive, but again this is not something that will phase me as I have already had experiences sitting this side of a race car.

“We are heading for a street fight and this is the sort of racing I feel I fit to perfectly. I have already won this year in the BMW M3 GT round Long Beach so can’t wait to get on the streets of Surfers Paradise.

“I am looking forward working with the legendary Dick Johnson and I am delighted BMW is allowing me and my Le Mans team-mates to compete in this race.”

Müller is a talented German racer who has forged a career in touring cars and sports cars during the last 15 years.

He has driven factory cars for Ferrari, Porsche and is currently part of the BMW Motorsports operation.

“I have heard so many positive things about this event, so cannot wait to go there and support the team’s campaign.

“I have very fond memories of Australia. The last time I competed there was in Adelaide in 2000. I won the race and claimed the ALMS GT title.

“The racing in V8 Supercars is amazing, and I’m really grateful to BMW Motorsport for giving me this opportunity to be a part of the Gold Coast event.”