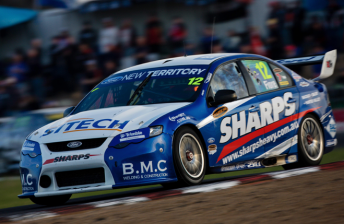 Dean Fiore is considering a change to his racing program in 2012 and beyond.

The single-car V8 team owner/driver is looking at how he goes about competing in V8 Supercars, which could include a change to his current structure.

Fiore says that he is committed to remaining in the sport, but discussions about how he goes about his racing are in play.

“We’ll definitely see out the year in our current structure, but we need to look at all that going into next year and beyond,” he told Speedcafe.com

“It’s definitely a massive talking point for us now and I think it will be resolved in the next couple of months.

“We’ve also got to think about 2013. We’ll be jigging our decision around how we see the landscape in 2013 and beyond. It’s a very important stage in Triple F’s involvement in V8 Supercars. We’ve got to make sure we make the right decision, that’s for sure.”

Besides Fiore’s V8 Championship entry, his team also prepares a car for his younger brother Todd in the Fujitsu V8 Series.

CLICK HERE for more with Fiore and his future in V8 Supercars in this week’s edition of Cafe Chat.