Steve Richards to race at Winternationals 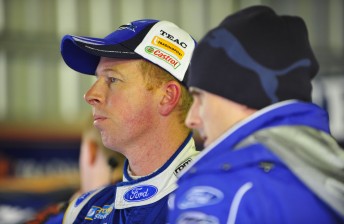 A Porsche Turbo and a drag strip aren’t two usual bedfellows – but this weekend at the Castrol EDGE Winternationals, current Porsche Carrera Cup Championship leader Steve Richards will pit a Porsche against a Pro Stock drag car. But before that, drag racing will once again be taken to the city in a huge promotion for the 44th annual Winternationals.

Up to five drag racing machines will be on display in Reddacliff Place (adjacent to Queen Street Mall), where race tickets, merchandise and other giveaways will form part of the colour of the event. A selection of ANDRA Pro Series drag racers will be on hand to sign autographs throughout the day, with the official autograph session to take place at 12pm.

With on track action kicking off Friday, Richards leads the entertainment program at the four day extravaganza – which will also see the high flying, back flipping action from the Showtime FMX crew and the current Street Machine Car of the Year – Graeme Cowin’s King Kong Cuda.

“I’ve never raced on a drag strip before, it will be different, the dragsters are insanely quick, but I reckon that people will be surprised at the pace of the Porsche,” the twice Bathurst champ said.

Richards will race against a Pro Stocker, whilst the other part of the program will see drag racing’s glamour boy, Shane Tucker line up in an SS Commodore against one of his Pro Stock brethren.

The Castrol EDGE Speed Comparison will take place on both Sunday and Monday.

Showtime FMX – presented by Castrol – features many riders that have performed with the Crusty Demons and Nitro Circus Tours over recent years and are widely renowned as being one of the best troupes in Australia.

They will wow the crowds in an off-track display at several points during the Castrol EDGE Winternationals and may even take to the track itself for some truly spectacular high-flying mayhem.

In terms of other entertainment and static displays – race-goers will get the first chance to drive the Darren Morgan Racing Top Fuel Simulator.

DMR have constructed a life like simulator from a Top Fuel rolling chassis with Fusion stereo system and the man himself thinks it’s the closest thing to belting down the quarter mile in excess of 300 miles per hour.

“It’s amazing how much of a feel for it you get,” the current ANDRA Pro Series Top Fuel leader said. “About the only thing that’s missing is the smell of nitro – and I’ve thought of adding that too!”

The simulator forms part of the Castrol EDGE Compound, which will also see the King Kong Cuda in Queensland for the first time. The car – based on a 1970 Plymouth Barracuda – has been hand crafted by Graeme Cowin and his team.

It is absolutely immaculate and won the Street Machine car of the year back in January. Joining it will be the historic Castrol GP 50 car of Victor Bray – significant in that it was the machine which developed GP 50 – which has gone on to become the basis for the world wide platform for Castrol EDGE 25w50. 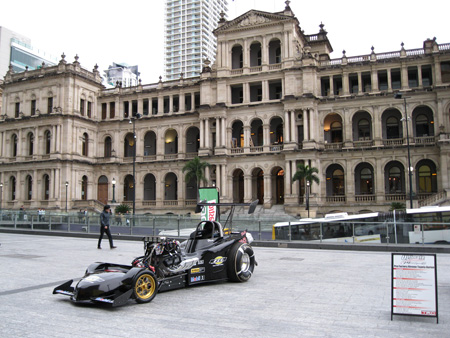 Next Story Brisbane warmed up by nitro attack 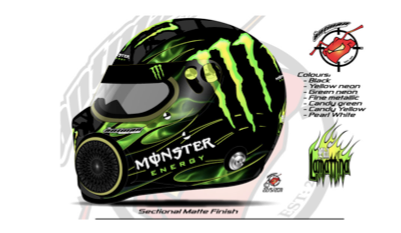