Qld Parliament gets a high-octane visitor 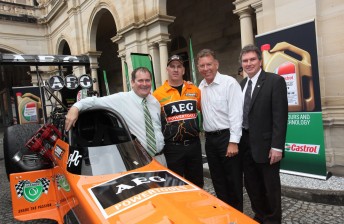 In the early part of this year, Queensland’s Parliament House was rocked by natural disasters that were hitting the state with regularity, but this morning it was rocked by the sound of Darren Morgan’s ANDRA Pro Series leading Top Fuel dragster ahead of the 2011 Castrol EDGE Winternationals at Willowbank Raceway this weekend.

Minister for Sport, Phil Reeves got behind the wheel of the 8,000 horsepower behemoth before nitro filled the air (and the corridors of power). Several blips of the throttle left the Minister revved up for the economic and tourism injection that the Winternationals will bring to Ipswich and South-East Queensland this weekend.

“The Castrol EDGE Winternationals provide a great boost for Ipswich – the town has been through hell over the last few months,” Minister Reeves said. “Events like this are about jobs, tourism and the fans having a good time.

“Sport plays a major part in the communities and towns of Queensland, the sport of drag racing is a big part of that in Ipswich. 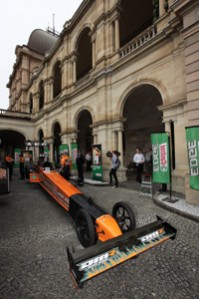 “It gives people a major boost – in that normality is coming back to their lives – and there’s nothing more normal around Willowbank and Ipswich than drag racing.”

The four day event will attract over 520 competitors and 40,000 spectators to the area and continues to grow in stature internationally – particularly with the inclusion of NHRA professional, Cory McClenathan this year.

“Ipswich has done it tough this year as everyone knows,” said Wayne Wendt, Member for Ipswich West. “We’ve just announced a new deal with V8 Supercars to keep the V8s in Ipswich over the next few years and this weekend the Castrol EDGE Winternationals will take place – so motorsport is doing it’s part to get Queensland back on its feet, that’s for sure.”

Ipswich City Council and its Mayor, Paul Pisasale are huge supporters of the Winternationals and the Mayor’s representative at today’s proceedings – Councillor David Morrison – gave the Winters a huge tick.

“Without a doubt, this will lift the spirits of the people and give the city such a boost after it has been so down,” said Councillor David Morrison. “You never like to put a dollar amount on an event like this, but just look at the number of drivers and their crews that are in town, not to mention the spectators that have come from around Australia and the world for this wonderful event.”

The Castrol EDGE Winternationals fires into life on Friday and carries through to the Queen’s Birthday Holiday Monday. Top Fuel hits the track for its first session on Saturday.